A Q&A with Jonathan Ames

Jonathan Ames is the author of ten books including Wake Up, Sir!, The Extra Man and You Were Never Really Here, all published by Pushkin Press. He also created the hit HBO comedy Bored to Death, starring Ted Danson, Zach Galifianakis and Jason Schwartzman, as well as Blunt Talk, starring Patrick Stewart. His thriller You Were Never Really Here was adapted for an award-winning film by Lynne Ramsay, starring Joaquin Phoenix. A Man Named Doll, recently published by Pushkin Vertigo, is the first in a series of offbeat, darkly comic Hollywood noirs. We asked Jonathan a few questions about his latest novel:

The star of your new series is a Los Angeles-based private detective called Happy Doll. First of all, could you tell us a little bit about him and about what he gets up to in A Man Named Doll?

Happy, who often goes by Hank, is a former cop and Navy man. He’s fifty years old, celibate (not intentionally), and lives with his dog, George, a rescue. He goes to psychoanalysis four times a week and he’s able to do this because his analyst is part of an institute that sees retired policemen pro bono. He’s a licensed private investigator but isn’t flourishing. To supplement his income, he works security at night at a Thai spa, where most of the clientele are men and security, unfortunately, is needed. One night at the spa, a customer goes berserk, endangering one of the young women who works there. Trying to stop the man, Happy is horrifically injured — his face is cut open with a hunting knife — and Happy is forced to kill the man, which had not been his intention. Reeling from this incident, Happy is plunged into something even worse. An old friend from his days as a cop comes to him, dying from a bullet wound. The friend, Lou Shelton, in desperate need of a kidney and unable to get one through conventional means, had gone exploring in the black market, got shot, and dies in Happy’s arms. Happy sets out to find his killers — and so that’s what he gets up to, more or less (actually a lot more) in A Man Named Doll.

Happy is such a likeable and original character – to me he seems like a cross between Philip Marlowe, Jack Reacher and The Dude from The Big Lebowski, with a dash of Bertie Wooster thrown into the mix. Were you consciously drawing inspiration from any other fictional detectives when you created him?

I wasn’t consciously mimicking any famous fictional detectives, but, of course, so many are in my mental-reader’s-dna… The three characters you mention from the world of fiction are all characters and narrators that I love and have read over and over, and I very much like the Dude in The Big Lebowski, but, no, I was not consciously referencing them. I guess he’s my own P.I. but all those you mention — and others, like Hammet’s Continental Op and Robert Crais’ Elvis Cole and Richard Stark’s Parker — are in the soup of my mind from which Happy sprang.

Happy’s faithful George bears a remarkable resemblance to your own dog Fezzik. Are there any other similarities between the two of you?

Between Happy and me or me and George? I’m assuming Happy and myself. Well, like the above question, naturally, there are parts of Happy that come from me, like the fact that he eats canned fish and canned soup. That’s a trait we share. For good or bad. Other than that we are really quite different.

What does the future hold for Happy?

In my novel The Extra Man, the character Henry Harrison says: ‘Through troubles and into more troubles — that’s my motto.’ And so that will be the case with Happy: more troubles, which readers will get a glimpse of with the first few pages of The Wheel of Doll, which is included at the end of A Man Named Doll as a teaser.

Which other crime and thriller authors do you most admire and why?

There are too many to list. But I’m currently reading Megan Abbott’s Take My Hand, which is excellent: a thriller jumps that back and forth in time, with incredible character depictions and a first-person narration that is very beguiling. Others I admire tremendously: Ross MacDonald: each Lew Archer book has so many suspects, they just keep me guessing until the very end of the novel. Richard Stark (pseudonym for Donald Westlake): His Parker series is beyond brilliant. The prose is like from a rivet gun and the plotting is magisterial. Chandler: the prose. Dashiell Hammet: the prose. I love them all!!

You’ve written essays and novels, for film and TV, and had success with so many different styles, from madcap comedy to hardboiled thriller. Do you make a conscious effort to vary your output or does it just come naturally?

I think I’m like a bird that pollinates. I go where I scent a flower or something or to be more crass: I go where I can pay the rent. Except I wasn’t such a good pollinator: for the first ten years of my career, l wrote novels, 1989 — 1998, but I couldn’t actually pay the rent. I always had a variety of jobs (taxi-driver, doorman, phone-sales). Then I had a column in a throw-away newspaper, from 1997 to 2000, which sort of helped pay the rent, but that’s because I had a very cheap apartment. But, still, it was my other jobs that really paid the rent, including the main job I began to have in the late 90’s, which was as a teacher of writing for adults in night classes and then later in colleges as an adjunct, low-paid professor. All the while, I tried to write with the goal of entertaining and giving the reader pleasure. Then I lucked into television in 2009 and could finally pay the rent just from writing, but that was after twenty years, since my first book, I Pass Like the Night, was published in 1989. Anyway, I’m not sure I answered the question. There’s been no coherent rhyme or reason to what I’ve done. Like a spider making a web.

Your much-loved HBO series Bored to Death was about a writer named Jonathan Ames who tries to make it as a private detective, Have you ever tried to solve a mystery or crime yourself?

Yes. I discovered a crime — did some research to prove it — and revealed the criminal but I can’t discuss it publicly. And a few times in life I’ve tried to come to the aid of people in distress. For example, twice I’ve chased down purse-snatchers but failed in both attempts. But I tried!

A Man Named Doll by Jonathan Ames is out now. If you want a bigger bite, check out Jonathan’s introduction, his reading from the book, and a special Happy Doll playlist to get you in the West Coast noir vibe. 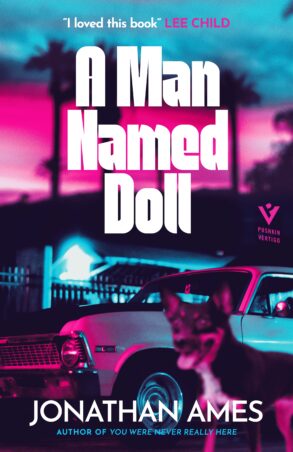