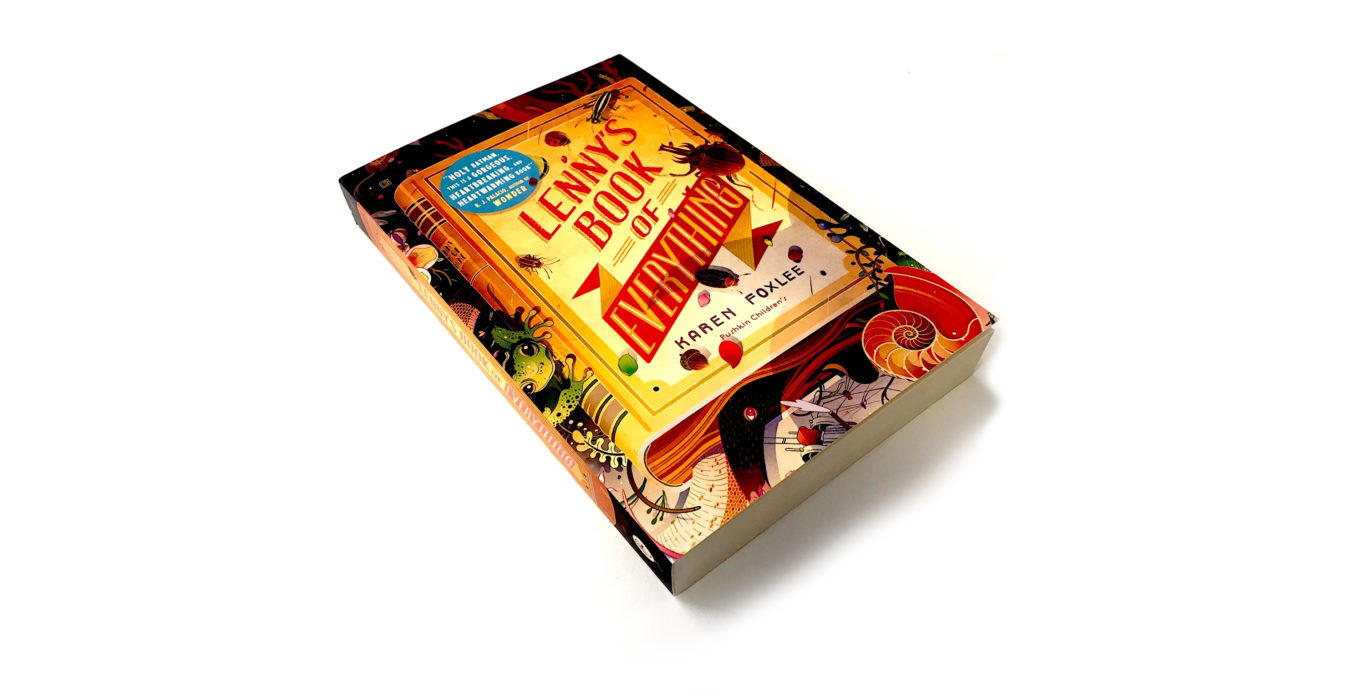 Earlier this week it was announced that Karen Foxlee has been shortlisted for the UKLA Teachers Book Award for her deeply moving novel, Lenny’s Book of Everything. Congratulations, Karen!

Our children’s editor-at-large, Sarah Odedina, took the opportunity to sit down with Karen and ask some questions about her writing process, the characters that live in her head, and what she’s working on next. Here’s what she said…

Why did you choose to write about Lenny Spink and her brother Davey?

I honestly think they chose me.  In the beginning all I had was a strange set of ideas.  I knew I wanted to write about a single mum with a child with an illness the makes him grow abnormally fast.  I also knew that this story had to somehow involve an encyclopaedia set.  Like every other story beginning of mine, I thought, wow, that’s really quite weird.  But there was something about the ideas that excited me.  It took several failed attempts and shelving the whole thing for some years before it worked.  After my mother died and while I was grieving, these story ideas started calling me.  Lenny, the young narrator, was there waiting for me when I began to write.  As she told the incredible story of her younger brother Davey, and their Build-it-at-Home encyclopaedia set, a story about love and loss and being different began to emerge.  I knew everything was going to be okay.

I think I set the book in the 1970s for a couple of reasons.  Firstly, I really love writing about that period in time.  I was a child of the seventies and that world couldn’t be more different to today. It was much simpler, there were so many more freedoms for children.  I find it really comforting to return to that time in my imagination.  But, secondly, I also needed a time without the medical advances we have today. Davey’s condition is essentially one of my own making but I wanted the health professionals to be baffled by his illness and without all the amazing technologies and treatment options we have today.

Do you base your characters on people that you know?

I don’t set out to base characters on people I know but I think people I know (or parts of them) are absorbed into my characters without my being conscious of it.  I think there are many parts of Cindy Spink, Lenny and Davey’s mum, that come from me.  I’ve also met lots of Mr King’s in my life.  Lenny and Davey aren’t really like anyone I know but they do a lot of things that my siblings and I did together.

What do the encyclopaedia’s offer the Spink children?

I really drew on my own experiences when writing the encyclopaedia set into Lenny and Davey’s lives. I grew up in an outback mining town in Australia in the 1970s and I was about nine years old when our encyclopaedia set arrived.  It felt like the whole world had moved into our living room! It sounds corny but that knowledge, in those pages that we pored over, took us places we couldn’t have dreamed of, and opened our minds to endless possibilities.  I wanted Lenny and Davey to have a similar experience.  These siblings are really stuck in that little apartment overlooking a Greyhound bus station but through those pages that arrive issue by issue, they escape through knowledge and imagination to countless places.  And as life gets more difficult, I also wanted them to be comforted by those pages.

Do you have favourite things that you would look up in an encyclopaedia?

My mother was always encouraging us to look stuff up in our encyclopaedia set.  If we didn’t know something, or we said we were bored, she’d make us go to the shelf and spend time finding things out.  My love of random (but never useless) knowledge began with those books.  I would have to say I loved looking at the coloured plates on clothes through the ages and birds of the world.  I also really loved the map of the moon.

If you could only have one letter from the encyclopaedia which would it be?

I would definitely never be able to decide that! I’d always be thinking about what I was missing out on in the other volumes.  Some letters make me happier than others though so maybe I’d choose “I”.  Iceland, Io, the Industrial Revolution, and of course Insects.

Birds or Bugs – why?

Tough question.   My first novel “The Anatomy of Wings” focussed a lot on birds, especially the Australian birds of prey that I love.  “Lenny’s Book of Everything” is my bug book.  I certainly do love looking at beetles.  They are so strange and so beautiful and there are so many of them.  I live in sub-tropical Queensland and in summer our house is bug central! Sorry, if that horrifies UK people.  We have the most beautiful Christmas beetles and rhinoceros beetles and at the moment an absolute over-abundance of moths of every size, shape and colour.

Do you have anything to say about the UKLA shortlisting?

I was so surprised and over the moon to learn that I was shortlisted for the UKLA awards. What an honour when these awards are judged by teachers.  I’m so happy to think of my book being read and discussed in the classroom.  I know times are so tough now and children are home from school and away from their teachers and friends but I still hope that books can be a way for them to come together over the next months.

What are you working on now?

My day job is as a registered nurse so I am actually currently nursing in my local hospital in these strange and uncertain times.  On my days off I am dabbling in a couple of stories that are return to magic again for me, and I’m enjoying every minute.  I’m also so thrilled to announce that my new middle grade novel Dragon Skin will be published by Pushkin Press in the UK.  Without giving too much away it’s a story about domestic violence and dragons, the power of friendships, healing and hope.  I can’t wait for it to be in reader’s hands.

Intrigued? Lenny’s Book of Everything is available in print, ebook AND audio. Grab a copy of this wondrous book now, from Waterstones, Foyles, Hive, Amazon or support your local independent bookstore.