It’s no secret that we at Pushkin think reading books in translation is a tremendous way of expanding your world. And we’re not the only ones! As we close the book on 2020, we’ve been chatting to book blogger extraordinaire Abbie (@ab_reads), who set herself a challenge this year: to ensure that 50% of all the books she reads are in translation.

We loved this idea so much that we asked Abbie to create a starter pack for anyone looking to do the same. Abbie will be running a giveaway to win ALL five titles on her Instagram, so be sure to follow her here. You can also get them bundled together at a discounted price here. Over to you, Abbie!

My name is Abbie and I’m from the North East of England. I studied French and Italian at university, and then went on to do an MA in Translation, so while I was at uni I was very much all about the translation life. I then graduated and worked for a year at a magazine, where I thought I was continuing to feed my love of translation with my leisure reading, but when I tallied up the amount of books I’d read in translation at the end of 2019… Well, it was embarrassing for a translation student! So I decided to set a goal of reading 40% translated literature in 2020, which I then upped to 50%. Now, for every one physical book I read originally published in English, I then pick up another book which has been translated. So far this year, I’ve read over 100 books in translation, and it’s been a brilliant way for me to discover more books and authors from around the world. I imagine I’ll carry this pattern on into 2021! There is something in translation for everyone, whether you like fantasy, horror, historical fiction or literary fiction!

It’s a good looking stack, right? Here’s a little more about each title.

In 1940s Japan, the wealthy head of the Inugami Clan dies, and his family eagerly await the reading of the will. But no sooner are its strange details revealed than a series of bizarre, gruesome murders begins. Detective Kindaichi must unravel the clan’s terrible secrets of forbidden liaisons, monstrous cruelty, and hidden identities to find the murderer, and lift the curse wreaking its bloody revenge on the Inugamis.

In 1980s Yugoslavia, a young girl named Emine is married off to a man she hardly knows. But soon her country is torn apart by war, and she is forced to flee with her family.

Decades later Emine’s son, Bekim, has grown up a social outcast in a country suspicious of foreigners – until one night in a gay bar, Bekim meets a talking cat. It is this witty, charming, manipulative creature that starts him on a journey back to Kosovo to confront his demons and make sense of the remarkable, cruel history of his family.

Named after one of Iceland’s most magnificent volcanoes, Hekla always knew she wanted to be a writer. In a nation of poets, where each household proudly displays leatherbound volumes of the Sagas, and there are more writers per capita than anywhere else in the world, there is only one problem: she is a woman.

Paula’s partner has died in a car accident – but no one knows her true grief. Only hours before his death, Mauro revealed that he was leaving her for another woman. By turns devastating and darkly funny, Learning to Talk to Plants is a piercingly honest portrayal of grief – and of the many ways to lose someone.

Tender is the Flesh by Agustina Bazterrica (tr. Sarah Moses)

It all happened so quickly. First, animals became infected with the virus and their meat became poisonous. Then governments initiated the Transition. Now, ‘special meat’ – human meat – is legal.

Get all these titles in our discounted bundle here, and start your very own reading challenge. Follow Abbie on @ab_reads on Instagram or on her blog www.northernbibliophile.com.

All images are via Abbie Walker @ab_reads on Instagram. 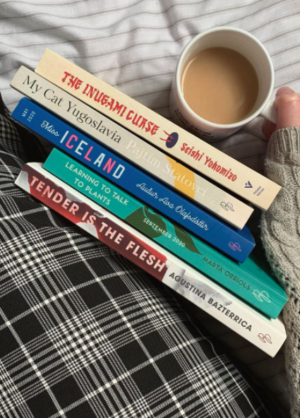