An Encounter with… Fyodor Dostoyevsky

Happy 200th birthday, Fyodor Dostoyevsky! The Russian great is a name we relate to epic works of literature, but did you know he was also a masterful short story writer? In our new Pushkin Collection title, A Bad Business, Dostoyevsky’s brilliance shines through in a way you may not have seen before. We asked translators Nicolas Pasternak Slater and Maya Slater to tell us exactly why you should be picking up Dostoyevsky on his bicentennary.

All Dostoevsky’s great works reveal him to be a master of penetrating psychological portrayals – of his heroes, villains and walk-on characters alike. He was also a deeply humane philosopher, a political and religious thinker, and above all an unrivalled storyteller, with plots full of suspense, twists and surprises. What is sometimes less appreciated is his wicked, even grotesque, sense of humour, which enlivens the tensest and most gripping situations.

The qualities we admire in his novels are present in abundance in his short stories, published in various periodicals and later in his own journal, A Writer’s Diary. Indeed, it was as largely as a journalist that he earned his living. The short stories in this collection reveal the great novelist’s genius in a concentrated, distilled form; as a sidelight on his major works, they are both unexpected and illuminating: some wildly funny, some deeply moving and pitiful, some painfully cruel.

In ‘The Crocodile’, a pompous self-promoting civil servant is swallowed alive by a crocodile. The author uses the episode to nail everyone involved, each character completely self-centred. The victim himself sees his plight as an opportunity to make his name by haranguing the public from inside the crocodile; for his frivolous, pretty wife it is a chance to become a merry grass widow; while the animal’s owner plans to make a fortune charging monstrous sums to see the creature.

In ‘A Bad Business’, a high official gatecrashes his humble clerk’s wedding, and gets spectacularly, hilariously drunk, to the excruciating embarrassment of the lowly wedding-guests. Then there is the morning after…

In ‘Conversations in a Graveyard’, a masterpiece of black humour, the dead in their graves bicker about precedence, revel in their immoral past lives, plot post-mortem debaucheries, and argue over who smells the worst as they decompose.

In the chilling tale ‘A Meek Creature’, the narrator is a sadistic, half-deranged pawnbroker who subjects his defenceless child bride to a succession of warped psychological ordeals. Dostoevsky lets the narrator speak for himself, and despite his disturbing self-justifications, our reactions on reading the tale are a complex mixture of disgust and compassion.

The short tale ‘The Heavenly Christmas Tree’ is a sad little sketch of a penniless orphan child, alone and hungry in a callous, unfeeling city at Christmas time. Another seemingly simple tale is ‘The Peasant Marey’, a moving semi-autobiographical account of the author’s childhood, which opens with a vivid description of his detention in a prison camp, in vile conditions and among rough, brutish fellow convicts. This is based on Dostoevsky’s own experience, following his mock execution and banishment to a Siberian gulag for political transgressions.

There is no doubt that Dostoevsky’s own appalling experiences contributed to the piercing insights into human virtue, vice, vulnerability and suffering which we find in all these tales. And yet his stories have one thing in common – as a writer he is never judgmental. He narrates, describes, and leaves us to draw our own conclusions. That makes these short stories all the more powerful.

A Bad Business: Essential Stories by Fyodor Dostoyevsky (tr. Nicolas Pasternak Slater and Maya Slater) is out now in the Pushkin Collection. 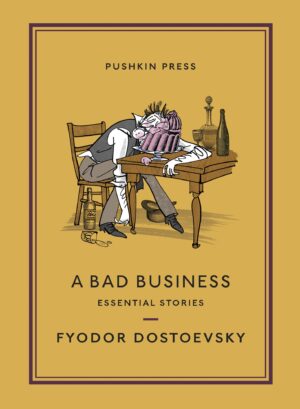