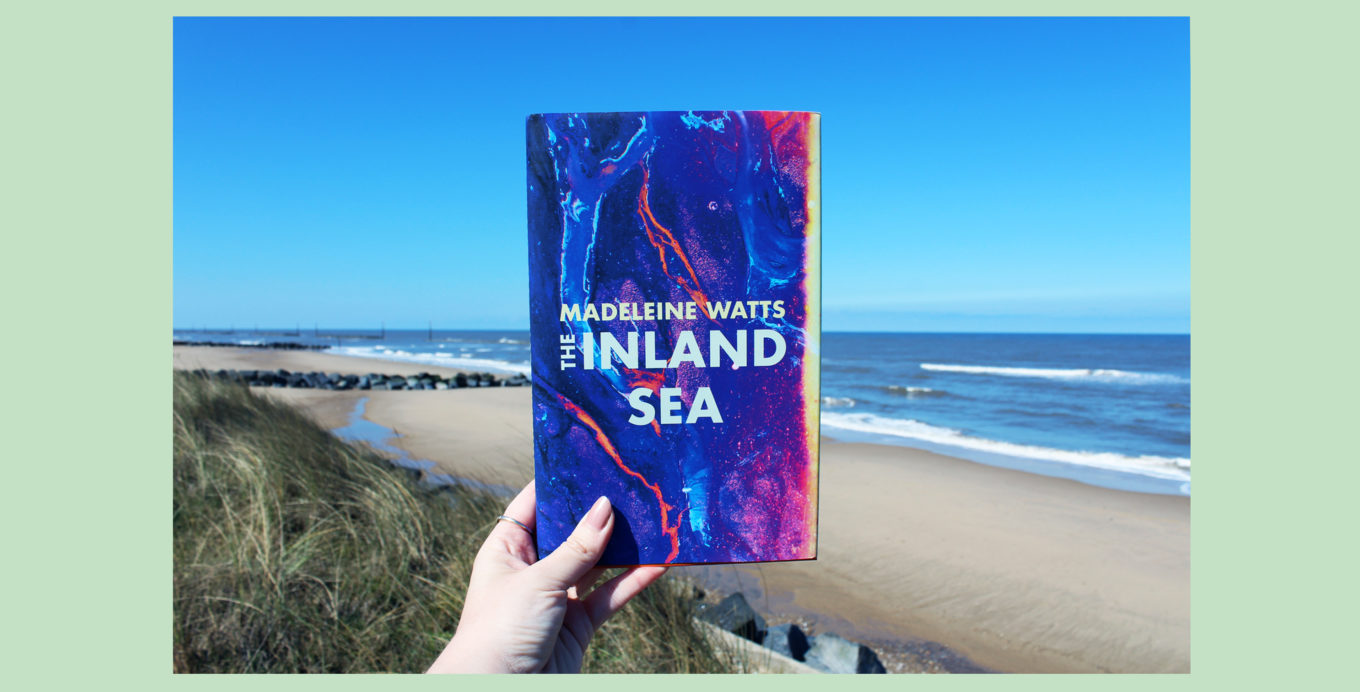 Madeleine Watts is the author of the recently released debut, The Inland Sea. Adrift and apathetic, a young woman works as an emergency dispatch operator in Sydney. As the calls for help roll in, she slips further and further into self destruction, grappling with what it means to come of age in a dying world. A vibrant new voice in climate fiction, Watts reveals some of her biggest inspirations – the women writers of Australia.

My earliest awareness of Australian literature – and myself as an Australian – came from reading male writers. My teenage exposure to my country’s literature was to the familiar, big name writers. I was immersed in the lyricism of Patrick White, the historical complexity of Peter Carey, and the soul-searching masculinity of David Malouf. Until I finished high school, I’d have been hard-pressed to name a notable female Australian writer.

There are, obviously, many. The women who have written about Australia are rarely easy to categorise. Many of them have written from exile, having immigrated to Europe or America, for much or at least a portion of their lives.  They are rarely as well known as their male counterparts, at either a national or international level.

In 1975 Anne Summers wrote a book called Damned Whores and God’s Police, which described how Australian women have historically fallen into one of two subject positions – moral degenerates, or dutiful and virtuous wives and daughters. She called this the existential straightjacket. The women I have chosen for this list are united in their attempts to revisit and revise a vision of women’s experience that breaks free of the existential straightjacket. They are also the books that have meant the most to me.

Barbara Baynton was writing at the turn of the twentieth century, when Australian literature was thought of as having a utilitarian purpose – building a sense of national sentiment. Baynton wrote stories about rural Australian life, but whereas male visions of the bush were sentimental and floridly written, the stories collected in Bush Studies are like nothing else – economic of phrase, and extremely stark. The stories focus on white women’s experiences of the newly colonised bush, and “the terror Baynton evokes,” writes Helen Garner, “is elemental, sexual, unabashedly female.”

Christina Stead was born in Sydney, and left in her early twenties. She spent most of her life living between London, New York, Antwerp, and Paris. She was a modernist, as skilled and as worthy of recognition as Virginia Woolf and Gertrude Stein, and For Love Alone is a city novel in the modernist vein, doing for Sydney what Joyce did for Dublin. She captures the city as it’s most lush and dissolute, interweaving the sensuality of Sydney with the coming-to-consciousness of the protagonist, Teresa, as she falls in love, yearns for education, and grows desperate to escape Sydney.

Shirley Hazzard, The Transit of Venus (1980)

The Transit of Venus is a story of two Australian sisters who emigrate to England in the 1950s, and the different romantic and emotional paths they take from then on. Hazzard, likewise, left. She moved to New York, where she worked at the fledgling United Nations and lived what appeared to be a fairly glamorous life (she once wrote a book about regularly holidaying with Graham Greene on the Italian island of Capri). The Transit of Venus is Hazzard’s masterpiece. It is a book haunted by the spectre of everything claustrophobic and lovely about Australia, by the moral vision of art-making, and by the imperative that women attain personal independence.

The Children’s Bach is Garner’s best work of fiction. In the 60s and 70s Garner was an active feminist, and the lessons of the women’s movement are woven throughout The Children’s Bach (along with what one senses she felt as an obligation to write about what happens to women in their houses.) It is a novella about a constellation of families in inner-city Melbourne and the new patterns of living they establish. She writes about the simple pleasures of the domestic and commitment, and how those pleasures rub up against the desire for sex and escape and darkness.

Elizabeth Jolley grew up in England and emmigrated to Australia in her thirties, not publishing her first novel until her fifties. Her most autobiographical work, the Vera Wright Trilogy was written late in her life, and the three books are marked by the influence of modernist forebears – Virginia Woolf, Jean Rhys, and Proust. Jolley is, like Rhys, a master of the ‘unsympathetic’ protagonist, a first-person voice expressing herself in all her complexity, spininess, and vulnerability. The novels are structured by patterns of association, with Vera recalling her childhood, her complicated relationships and pregnancies, and her eventual move to Australia, filled with loneliness and queer desire.

Stravinsky’s Lunch is a double biography of two twentieth century Australian painters, Grace Cossington Smith and Stella Bowen. Modjeska is a novelist and scholar of Australian women’s literature, and refers to the book as “a koan in my own practice as a woman and writer.” The book poses a question summed up by an anecdote told about Stravinsky, namely, that when Stravinsky was working on his music, he insisted that his wife and children eat lunch in silence. Through examining the lives of Bowen and Cossington Smith, Modjeska implicitly asks how women can be artists while also being wife and mother, when one has to make the children be quiet at the lunch table. Or is it better to be alone? And can one separate life and art?

Carpentaria is a vast, complex narrative centred on the fractious indigenous community living on the edges of the fictional town of Desperance in the sparsely-populated Gulf of Carpentaria in Australia’s north. The book’s dramatic action centres on local politics and the surrounding tropical landscape, which is the desired location for a mine. Carpentaria is a book that deals with ecological responsibility and land tenancy, centring indigenous ecological knowledge at a time when it could not be more necessary. Wright draws on the power of indigenous oral storytelling traditions and knowledge systems, infusing the narrative structure and the story itself with a unique power.

Kefala is principally a poet, but Sydney Journals is an excellent introduction. It is a collection of diary fragments, which have been edited and rearranged so that one is never sure at what point in the chronology we are meant to be. In Sydney Journals she frustrates what is meant to be the most banal and documentary of forms, the entire project of communication. Kefala was born to a Greek family in Romania, and emmigrated to Australia in the late 1950s, learning English as a second language. All her work is intensely interested in language and its ability to give expression to human thought and expression, or, rather, its inability.

Taylor began writing this memoir when she was extremely ill with melanoma, suspecting that it would be the last book she would ever write. It was. She passed away shortly before Dying was published in 2016. Clear-eyed, unsentimental, incredibly wise, Dying is not really about death at all. Or, it is, but it’s about the ways that death is no real tragedy—we are all bodies, we are all yoked to the passage of time, we will all pass from life and our consciousness cease, but we are not so very different from the birds and the leaves and the light, all of us permeable to the world.

Josephine Rowe’s debut novel is told from the perspective of multiple members of the same family, who are all dealing with the sometimes violent, and sometimes absent, presence of their Vietnam-veteran father. Rowe is a masterful short story writer (and a writer of very, very short stories) and that attention to detail and focus on precision is evident in every single sentence of this sparse, luminous novel. Like the phantom Australian panther of urban myth described in the opening pages, all sorts of animals move through the undercurrent of the novel, with all the vulnerability of an animal, and all the damage an animal can cause.

A collection of five long stories, This Water was Farmer’s last book before her death, and draws on a lifetime’s thought about women and their place in the world. Every story is concerned with the natural world: ice, fire, stone, and in ‘A Ring of Gold,’ the standout novella in the collection, water. Mythology is present throughout – there is a retelling of the selkie story, and a story about children who are transformed into swans by a wicked stepmother. The narrative in all of the five stories is discontinuous, and so the stories progress through a series of impressions, constantly drawing you back to the physical world.

A beautiful story collection reminiscent of the minimalist stories of Amy Hempel and Raymond Carver, all of Kassab’s stories take place in the Australian-Lebanese community centred in the western suburbs of Sydney. The stories focus on the downward spiral of one family, interspersed with vignettes about other people living around them. The stories are preoccupied with loneliness and longing, the difference between living in a place and feeling at home in a place, and her prose is meticulous, with each story worth multiple re-readings to see the web of meaning Kassab has built.