The Ghost of Frédéric Chopin 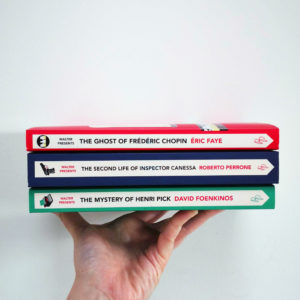 Prague, 1995: Vera Foltynova, a widow in her late 50s, claims to receive visits from the ghost of great composer Frédéric Chopin. What’s more, she declares that Chopin has dictated dozens of compositions to her, to allow the world to hear the sublime music he was unable to create in his own short life. Many dismiss her story as a ridiculous hoax, while others swear that the music has the same beauty and refinement as the work of the dead master.

Ludvik Slany, a secret police agent-turned-television journalist, is assigned to make a documentary debunking Vera’s claims. He arrives in Prague ready to uncover a scam, but the more he subtly tries to trick her into giving herself away, the more he begins to think he may be witnessing a genuine miracle…

An intricately plotted mystery imbued with the foggy atmosphere of post-Communist Prague, The Ghost of Frédéric Chopin is an engrossing story of music, faith and the ghosts of the past.