Brutal barbarians or heroic adventurers?: Tore Skeie on the Vikings, Anglo-Saxons and The Wolf Age

Tore Skeie’s The Wolf Age, recently published with Pushkin, takes on a fascinating new perspective on the Vikings, the Anglo-Saxons and the building blocks of their societies. In a luxurious hardback edition full of images, illustrations and maps, this is ‘exemplary popular history’ (Neil Price, author of The Viking Way).

To find out more about Tore, his writing process, and why he chose this period of history to explore, we sat down with him to ask a few questions.

The Wolf Age gives a thrilling new perspective on the conflict between the Vikings and Anglo-Saxons. Could you tell us a bit about that new perspective?

In my book I tell the story of a very long and brutal conflict that started out as a series of small-scale Viking raids on the English shores shortly before 1000 AD and ended with one of the largest military enterprises in early medieval history in Europe – the Danish king Cnut’s invasion and subjugation of England. Today these events are, I think, largely unknown to most people on both sides of the North Sea. In the UK this period has been overshadowed in the popular mind by the more famous Norman invasion in 1066. And in Scandinavia it has been largely overlooked as something that happened far away.

Yet these events played a crucial role in shaping both early English and early Scandinavian history. I wanted to tell this story in a way that captures what I think is central to understand what the Viking age was really like – an age when our modern nations and identities did not yet exist, and the North Sea area was a vast, fluctuating and interconnected world, where Anglo-Saxon warlords, Norman knights and Viking kings traded, fought and competed for resources, and the throne of England was the ultimate prize. Everything that happened in England was connected to what was happening in Scandinavia at the same time, and the same is true the other way around.

Do people see the Vikings differently in Norway than we do in the UK?

I suppose people in the UK, as in most of the world, associate the Vikings with barbarism and brutality, whereas the image of the Vikings is much more positive in Scandinavia, where they are depicted as heroic adventurers.

Both the barbaric and the heroic image derive from medieval sources. The image of the brutal barbarian derives from the way heathen Scandinavian raiders were depicted by contemporary Christian monks, and the monks painted a very dramatic and one-sided picture of them. On the other hand, the image of the heroic Viking derives from the Icelandic sagas, written much later, by the Vikings’ distant descendants, who looked back on their ancestors in awe and wonder.

The sagas are truly great literature, but of course they are not very realistic – they are a bit like spaghetti westerns, conjuring up a romanticized past that never really existed, with larger-than-life heroes with grand and simple personalities. The saga literature became important in the forming of modern national identity in all the Scandinavian countries in the 19th Century, and its heroic version of the Vikings has since given peaceful modern Scandinavians the opportunity to identify with their bold and warlike ancestors from a safe distance.

Of course, none of these images derive from the Vikings themselves, who never wrote down their history, and I don’t think they would really recognize themselves in either, though they would surely be flattered to have become so famous.

What do you think the Vikings and Anglo-Saxons had in common, and what divided them?

I think modern Scandinavians and modern Britons would have a hard time separating a Viking and an Anglo-Saxon from each other. At the time I depict in the book, they had a lot in common. The language was similar, so similar that they could talk to each other. Their knowledge of history and their outlook on the rest of the world seem to have been similar. They told similar stories and their poets composed similar poetry. The basic foundations for life were the same – most people lived by farming the land using the same techniques. They ate very similar food. They wore almost identical clothes. Both societies were dominated by warrior elites who travelled by ship and horse, but who preferred to fight on foot. Their religion was becoming the same too – the Scandinavian elite around 1000 AD were baptized Christians, though many of them seem to have been able to practice the old and the new religion simultaneously.

The Wolf Age does a brilliant job of imagining the mental and spiritual worlds of people in Britain and Scandinavia during the eleventh century. What do you think is the biggest barrier for people from our times when they are trying to imagine what it might have been like to be a Viking, for example?

Obvious things like their magical religion, the short life expectancy, disease, and physical hardship aside, I think modern people have a hard time imagining what it would be like to live in a society without the modern state. Today, the state looks after us in so many ways that would be completely foreign to an English or a Norwegian person living a thousand years ago. We look to the state to provide us with security, to tutor and look after our children, to take care of our elderly, to punish those who steal from us, to provide a doctor if we get sick, and so on. Medieval people had no state to turn to and had to sort such things out by other means. This created societies with different identities, loyalties, and social fabrics than ours. Family, friends, and village community were more fundamentally important, and people sought protection under powerful lords who in return expected loyalty.

What is it about the Vikings that makes them fascinating to so many people?

I think the different images of Vikings, realistic or not, provide storytellers with ingredients to tell thrilling stories. The Viking in the form of a fascinating foreign barbarian with cunning and sophisticated ship technology is the perfect bad guy for one story. The Viking in the form of the bold, seafaring adventurer travelling to distant shores, is the perfect hero for another.

I grew up reading about Vikings and was deeply captivated and fascinated by both these incarnations. Now I find them even more interesting when brought out of the realms of fantasy they often inhabit and into the real world. Their world is so distant and strange and different, but at the same time so familiar, governed by mechanisms and rules that are still very much a part of the world today – the fight and competition for resources, the shifting alliances and politics, and the longing for safety.

The Wolf Age by Tore Skeie, translated by Alison McCullough is out now with Pushkin Press. 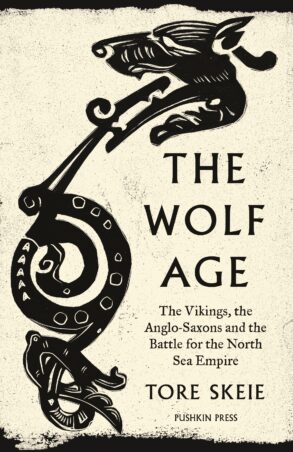