‘I write about what frightens me’: A Q&A with Steven Maxwell

Steven Maxwell’s heart-stopping thriller, All Was Lost, is out in ebook today. We wanted to find out a little more about this chilling book by talking to the author himself!

Tell us about how you came to write the character of Orla.

Crime story protagonists tend to be capable, resourceful, well-trained, artful. I’m not interested in these people in fiction. I set out to write about damaged people, in over their heads, scrabbling for a way out. I want to see the cornered animal hiss. Orla is everyone who has ever looked in the mirror and hated their reflection, who despises themself for being unable to do more for themselves and their family. The harried woman with the scruffy kid in the supermarket who looks drained and worn down, sad eyes dark and heavy, she’s a protagonist who’ll fight for her life and do anything she can to break from her cage. She’s the kind of protagonist I root for, the woman who makes something out of nothing, who’ll walk Inferno’s circles to claw back a shred of dignity to improve her life and the lives of her loved ones. Orla embodies that desperate mindset, that maddening rage for more.

Your novel is distinctive, among many other reasons, for its sense of place. Can you tell us how you explored this and why it is a common trope in crime fiction?

More than anything, I was inspired by Southern Gothic literature’s depictions of environment. Faulkner, O’Connor, McCarthy: their neutral focus on the natural world in all its beauty and horror has always intrigued me. To see monsters stalking corridors and streets is ordinary, it’s everyday—they are the places of the human, after all—but to see them out in the wild is something altogether more alarming, more elemental in its terror, more atavistic and animalistic.

When done right, location can add powerful texture to a story. To intensify Orla’s feelings of dislocation and placelessness, I mostly avoided using place names, but not their forms, their quiddities. As I tend to avoid describing the internal thought processes of my characters, preferring to stay as external as possible, location takes on a gravity in the overall telling of the story. The emotional descriptions of the characters often come directly from the wild topography of the landscape itself. It’s a technique that forces me to stop and look about the scene in search of objective correlatives, sensory ways to express what’s going on in my characters’ minds.

As for why sense of place is a common trope in crime fiction, I suspect it may be because of all genres crime is the one most likely to happen to us, the most feasible, the most banal, and this frightens and fascinates us. Home-invasions terrify more than supernatural phenomena ever could. To give crime fiction the gut-punch it needs to work, a well-written, identifiable location—not necessarily one lived and experiential, but one at least plausible—can go a long way in achieving this aim.

Which novels inspired you in the writing of All Was Lost?

A lot. Here are some:

Kiss Me, Judas (Will Christopher Baer)

Play It As It Lays (Joan Didion)

Can you tell us more about the decision to structure the novel with the chapters counting down backward?

With traditional chapter titles starting at 1, we have little idea exactly how many chapters it will take to reach the end, unless there is an index, and who wants that in fiction? (I’m sceptical of any novel that begins with an index, or for that matter a map, a family tree, or a cast of characters.) This open-endedness works for most books. But for All Was Lost, counting down backward gives the story a propulsive, anxiety-driven momentum. It tells us Orla’s time is limited and rapidly running out. There’s a fatality to it, a panicky urgency, lending the novel an air of impending doom and dread, an unavoidable finality as we hurtle through the dark in a headlong rush to zero’s void.

All Was Lost forces us to confront some of the darker realities of human existence. What can you share with us about this aspect of your writing?

I write about what frightens me, what angers me, what upsets me. Being working class and living life on foundations of sand, I’m afraid of poverty, I’m afraid of enforced idleness, I’m afraid of letting down my loved ones and wasting my life, I’m afraid of faceless entities with government mandates dismantling my life one arbitrary rule at a time in a Kafkaesque daymare. Ultimately, I’m afraid of being stripped of what limited power I have over my own existence. Like Orla, I know too well the precarity of the breadline and the insecurity and humiliation it inspires, and when I give expression to this pain, a rogues’ gallery of demons rises to eat my protagonists. I’m intrigued and empathetic toward broken, beaten characters, those who haunt the margins, eking out small, strange existences in shadow, and the oblique ways they must navigate the sunless alleys to survive. If these aren’t characters worth writing about and championing, I don’t know who are.

What is next for you?

I’m currently working on three novels (with several more churning about). One is a pitch-black epic historical set once upon a time in Puritan Britain, about a girl taken under the dark wing of a notorious witch-killer: her father. It was inspired by written accounts of historical witch-hunts during the greatest instance of femicide recorded.

Another is the one I’m working on for my PhD, a multi-genre novel of novellas that spans one hundred years and many countries and includes detective fiction, psychological horror, the 1970s Hollywood road novel, literary fiction, and SF. It follows whalemen and Nazis, movie directors and private investigators, astronauts, typographers, and human test subjects, all linked by blood, coincidence, conspiracy theories, and the manipulation of spacetime itself.

The last is a novel that has grown out of my PhD and discovered a life of its own. It’s about an autistic woman struggling to find a way to live in the wake of her wife’s suicide, an astronaut who left behind a journal and a void. A personal story, as all are, only more so.

If readers were to take away just one thing from reading All Was Lost, what would you like it to be?

Excitement would be nice.

All Was Lost by Steven Maxwell is out in ebook now, and available for preorder in paperback in January. 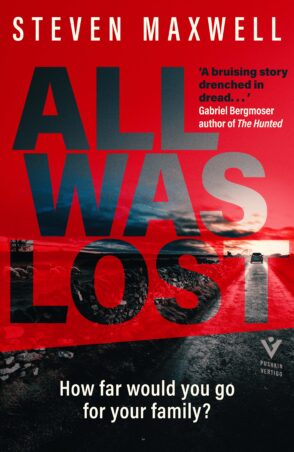