‘I’m omnivorous when it comes to reading’: A Q&A with Paul Howarth

Set in the wild Australian outback at the end of the 19th century, Paul Howarth’s Dust off the Bones is a compelling and condemning sequel to his acclaimed debut, Only Killers and Thieves. It’s a fantastically complex novel about trauma, resilience, and colonial responsibility, so we wanted to pick Paul’s brains about it.

How would you describe Dust Off the Bones in your own words?

This book has a bit of everything! Part Western, part courtroom drama, part revenge thriller, it’s set in colonial Queensland, Australia towards the end of the 19th century and tells the story of how a tragic killing shapes the lives of those involved, while also looking into the dark corners of British rule in Australia at the time.

Tommy and Billy McBride are two brothers with a shared violent past, but who are now leading radically different lives. Why did you choose to frame this book around two brothers?

The starting point for this book is a murder – or a number of them, to be more accurate – in which Tommy and Billy are both victims and perpetrators. I was interested to see how two brothers, close when they were children, would be affected by that, the different choices they would make, the men they would become, and the impact their shared past would have on their relationship. Tommy and Billy are very different characters and, as you say, take opposite paths in life: one stays, the other leaves; one confronts his demons, the other buries his head in the sand; one prospers, the other suffers, although not in the ways we might expect. And beneath it all is that tug of family loyalty: they are estranged when the book opens but never far from each other’s thoughts – will they find a way to reconnect, and what will happen if they do?

The Native Police of Queensland was a real-life, official arm of colonial law enforcement that operated in Queensland for much of the 19th century, patrolling the distant frontier supposedly in protection of white settler rights and “dispersing” (as it was termed) Indigenous Australians as and when they saw fit, often using deadly force. Each patrol comprised a white officer (usually British) leading a small detachment of mounted Aboriginal troopers, all armed, supplied and paid by the Crown.

They were mercenaries, basically, given free rein to act however they pleased, far away from prying eyes in the cities on the coast, often killing with impunity and without consequence: some historians consider the Native Police to be one of the biggest single killers of Indigenous people at the time. But despite knowledge of their methods being well known, and the numerous coronial inquests held, no Native Police officer was ever criminally convicted of an Aboriginal death.

Was there a real-life inspiration for Inspector Noone?

Yes and no. He is not based on any one particular Native Police officer, although he probably shares a few traits with some of the most infamous. He was a fascinating character to write: what kind of man, I asked myself, would sign up to such a position, would willingly carry out such a task? Worse still, what kind of man might actually enjoy it, consider his actions justified; what kind of man would thrive?

There is a quote from a period newspaper that I always kept in mind when writing Inspector Noone, a description of a Native Police officer in the Queenslander in 1875 (paraphrased here): “He inspired the Aborigines with such a wholesome dread, that it was only necessary to say his name and they would go yelling pell-mell into the bush.” That was the task that I set myself, breathing life into that quote when creating the character on the page: someone so terrifying that the mere mention of his name would be enough to make people flee in fright.

Do you think that fiction has a role in inviting scrutiny of colonialism and the abuses carried out by colonial powers?

It can do. Traditionally these are not things widely taught in classrooms or well known by the public at large, although that is slowly changing these days. Fiction’s role is to ask questions, not provide answers, and if reading about the past stirs curiosity then all the better. A good novel is immersive: we feel like we are there. Transporting a reader back in time, dropping them into that world, brings the history to life and allows us to see the world not only as it was but also the legacy that is still playing out today. The past repeats itself continuously. Sadly, human nature hasn’t changed a great deal, meaning novels such as this can examine both past injustices and those problems society is still facing today.

One important relationship in the book is that between Tommy and Arthur, an Aboriginal man who used to be the McBrides’ stockman. What more can you tell us about him?

Arthur is Tommy’s best friend and, with him and Billy separated, the closest thing to family he has left. They form an enduring bond but their relationship shifts and changes over the years, as Tommy grows up and becomes more independent and Arthur ages into an old man. I’m interested in male relationships, which are often defined more by silences and what is not said than grand gestures. So it was fascinating to see the ebb and flow of their relationship over time, particularly since it spans both generation and race, at a time when I imagine it would have been rare for close friendships to cross such lines. But then Arthur is a man who straddles two worlds, the old and the new Australia: he grew up with his own people, was then raised and educated on a mission station, and has been working for white cattle men for most of his adult life. He carries with him a lot of sadness and grief at what has happened in his past but is resilient and optimistic at heart, and his capacity to understand and forgive Tommy are crucial in enabling their relationship to survive.

Did you read many accounts of the real life stockmen and drovers who herded cattle in the Australian outback? It seems like a particularly hard and violent lifestyle.

I’m fascinated by these stories, and not just of the drovers: those times throughout history when people battled nature and all good sense with the odds stacked against them and little more by way of equipment than the clothes on their back. Epic voyages, foolhardy expeditions, tales of survival against the odds…and none more so than those men and women who endured starvation and drought to cajole giant herds of reluctant cattle through a desert as unforgiving as any on earth. It takes a certain character, and luckily there are first-hand accounts out there that I was able to read. They are colourful individuals and colourful tales, and it was great fun both to read about them and then create my own on the page.

Who are your writing inspirations?

It would be too hard and take too long to list the many writers I admire, and I wouldn’t want to miss anyone out! I’m fairly omnivorous when it comes to reading: anything compelling and well-written, whatever the genre, and I’m there. I do tend to find myself drawn to books with a sense of wildness, be that in setting or character, and I love a terrific villain. The best writers tell stories that compel readers to turn the page, make them feel something, make them think, that leave them breathless and a little bereft at the end…that’s what I’m trying to do with my books.

Dust Off the Bones by Paul Howarth is out now. 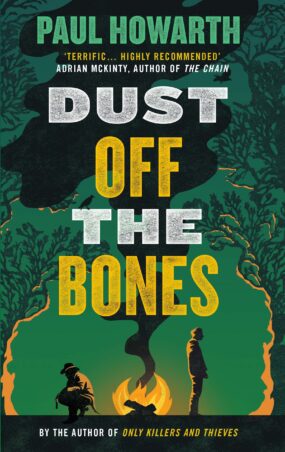 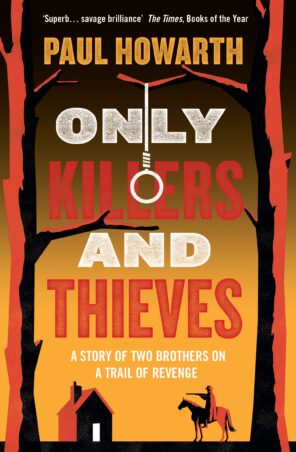