Look inside: an extract from A Line in the World by Dorthe Nors

There is a line that stretches from the northernmost tip of Denmark to where the Wadden Sea meets Holland in the south-west. Dorthe Nors, one of Denmark’s most acclaimed writers, is a descendant of this line; for generations, her family lived among the storm-battered trees and wind-blasted beaches of the North Sea coast. Returning after decades of inhabiting cities, she chronicles a year spent travelling up and down the coast, tracing the history and geography of the places she visits and untangling her relationship with the landscape she calls home.

Read an extract below…

There’s a place in the meadows by Harboøre, south of the fishing port of Thyborøn. To the west, beyond the slender spit of land, is the North Sea, with its storms and underwater freight trains. Here, on the other side, is the Limfjord, spreading. It’s as though it stretches in all directions, taking a run-up before it has to squeeze out through the channel that leads from the fjord to the North Sea. The Limfjord divides Northern Jutland from the rest of the great peninsula, and it’s gathering strength before it transforms from fjord to sea. Resting. Nissum Broad, they call that part of the fjord, and on the salt meadows down towards the broad I feel a sense of belonging. I know this marsh like I know my own breath. Same goes for the beach, the dam, the sky and the raised seabed on which I stand. South-east is where the last ice age halted, creating a rampart in the landscape as the ice melted and withdrew. The line that marks the maximum extent, they call it; and I know it. 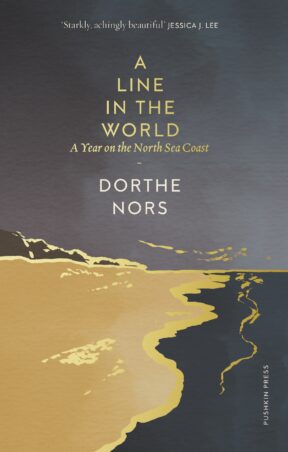