Literary translator and French teacher Lucy Raitz chronicles her relationship to the work of Marcel Proust, from dipping madeleines in tea as a child to setting up a Proust Book Club as an adult.

First there was the china-blue Scott Moncrieff set on my parents’ bookshelves, but I began with a small battered hardback from the school library. It was Combray, the first part of Du côté de chez Swann, in one volume. I read it in French because my school was the French lycée, and because I had been seduced by the extract we had studied in class, the part where the narrator, eating the madeleine dipped in tea, is aware that he is on the brink of a great discovery and that the clue lies in the taste. In his fear that the elusive revelation will slip away and in the intensity of his concentration as he searches for it, the long flowing sentences give way to an almost staccato present tense; it made you hold your breath.

I’d like to say that I was hooked, and I was certainly captivated enough to get the book out and read it through, after a fashion, but I was fifteen and in a hurry, and that first try left me with only flashes of insight and colour: the images projected by the magic lantern, Françoise’s endless asparagus, the anguish of the child sent to bed without the goodnight kiss. I still remember through a London evening in winter, sitting on the dark green carpet of my best friend Sophia’s room and eating madeleines dipped in tea, with the snow falling outside. We were having our own Proustian experience: pretentious, but enjoyable, and about as safe as a trip can be.

The second time I was only a year older, but in a different place: with a group of idealistic sixteen-year-olds, spending the summer on kibbutz, helping with the apple harvest. I had run out of reading matter and a French boy lent me Du côté de chez Swann. This time I read it all and the second part, Un amour de Swann, twice: it was a love story and I wanted to know what happened! Also, although there’s something extremely satisfying about reading a novel set in the place where you’re staying (Alexandria Quartet, A Suitable Boy, Goodbye to Berlin …) there’s also something beguiling about being transported to quite another place. You couldn’t really get farther from Kibbutz Mahanayim in the Galilee than the Normandy countryside and Belle Epoque Paris.

I was a student in Cambridge and Proust was the author for the week. This time, it was the style that counted, the endless metaphor that is Proust’s illustration of consciousness. It was summer and there were strawberries in the market: we ate them crushed with cream cheese, just like Marcel, to see the colour of the hawthorn blossom he loved. I was twenty, travelling around Italy and running out of books again when I found a copy of the Jeunes filles en fleur that I could ill afford and bought it anyway, taking an instant dislike to all those sporty and badly behaved girls cycling round Balbec.

And that was it, for a long while. I ploughed my way through both volumes of The Guermantes Way, even the longest dinner party ever, and then gave up half-way through the Cities of the Plain. And this pattern of starting at the beginning again and getting stuck repeated itself several times, until one day, ten years ago, a friend at dinner, an old Lycée friend, said that he’d never read Proust and wanted to. It was one of those moments when a plan appears ready-made in an instant: we would collect a group of friends and read the whole thing over two years, meeting every three months; that would be a volume per session. Some read in English, some in French. We did it; and sometimes I see a member of the Proust Book Club and we say what fun it was, and that there’s really nothing else that could provide the same satisfaction. Ulysses has been suggested, but …

I’ll read it all again one day. Not over two years, but one summer perhaps, endlessly; or when I’ve retired, if anyone gets to do that these days.

I’ve told the story of my reading as though, in the long spaces of time between those first forays in childhood and youth and the later struggles and eventual success, I had put Proust to one side. That’s not quite right; I read and reread Un amour de Swann constantly; I really can’t count how many times. Every time I was gripped, every time I felt Swann’s terrible anguish more acutely, every time the search for Odette through the Paris streets seemed more desperate and the pure freezing spring nights of the beginning of the affair more thrilling.

When the chance came to translate it into English for Pushkin, a publishing house I have always admired, it really was a dream come true. Like a lot of important things in life, it started as a postscript. I had written to Adam about maybe translating Le dernier des Camondos by Pierre Assouline, on the back of Edmund de Waal’s Letters to Camondo; I’d recently reread A Night at the Majestic by Richard Davenport-Hines which includes a lot about Proust’s last days and his death on the 18th November 1922; coincidentally, this was the year both my parents were born, and the 18th November the date of my mother’s death. So, as an afterthought, I added: Why not Un amour de Swann to coincide with the coming centenary? The history of my association with Pushkin Press and Adam’s kind encouragement over the years would take a few paragraphs more, but words are running out, and that’s another story …

Swann in Love by Marcel Proust (translated by Lucy Raitz) is out now from Pushkin Press. 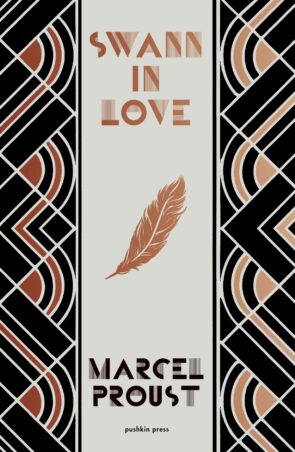