As part of our Pushkin Vertigo Spotlight Week, we sat down with Amy Suiter Clarke, author of the gripping true-crime-podcast-inspired-thriller, Girl, 11, and asked her a few questions about the book, her obsessions and what she’s reading next.

Tell us about how you came to write the character of Elle:

I developed Elle, the protagonist of the novel, after I had already come up with the idea for the antagonist. In some ways, that made writing her even more interesting as I could think of ways to make her the perfect foil for The Countdown Killer.

I wanted Elle to be a powerful, ambitious woman without making her some kind of specially trained badass. She’s just a normal woman who decided to start a podcast and investigate crimes. She’s chronically anxious, impulsive, and out of shape; but she’s also incredibly tenacious, passionate, and doesn’t give up easily.

What are your favourite true-crime podcasts?

I have so many! I like both investigative and storytelling podcasts, so my favourites are mix of the two. The Canadian Broadcasting Company does consistently incredible true-crime podcasts. Some of my favourites include Someone Knows Something, Missing & Murdered, and Uncover. They delve into specific cases over the course of a season, often unearthing new evidence and theories previously unknown to police.

I also love podcasts that cover potential wrongful convictions. Serial started that obsession for me, and podcasts like Undisclosed and Truth & Justice with Bob Ruff – both of which started as more in-depth investigations of the first season of Serial, incidentally – have continued it on. A few other favourite investigative podcasts include In the Dark, Bear Brook, The Murder Squad and Tom Brown’s Body. And of course, I’m absolutely a Murderino and still enjoy my weekly episodes of My Favorite Murder.

What do you think about amateur detectives – should they leave the work to police, or are they helping out when cases might have just gone cold?

Every police department operates differently and dedicates only a select levels of their resources to solving crimes. Violent crime is actually only a tiny percentage of what police do, and unfortunately, cases are often deemed cold rather quickly after they occur if an obvious suspect doesn’t present itself. With widespread internet, detective shows, and a wealth of true crime books and podcasts out there for everyone to access, it’s easier than ever for the average person to learn how to investigate a crime. So, my argument is, why not? If police aren’t actively working on a case, I don’t see the harm in an intrepid journalist or amateur sleuth from the community getting involved. Often, I feel that police resistance to help from the community in this way is more about ego or perceived reputation than the public good. If the details of an unsolved case are wasting away on some dusty evidence shelf, I think having a citizen detective breathe new life and passion into it by looking at things with a fresh perspective can be incredibly positive.

Your novel is distinctive amongst many other reasons for its feminist themes, was this an important aspect to you when writing?

I never set out to write a feminist book, but I’m a feminist myself, so it makes sense that this would permeate my writing. I often get asked if my political views come out in writing, and I think the answer to this is always yes. All art is political; it’s just we most often only notice the political themes if they conflict with or challenge our own.

I write from a place of passion, from anger. When writing Girl, 11 we were in the middle of the resurgence of the #MeToo movement, and several high-profile serial killers who predominantly murdered women were in the news. I saw the way these stories were told, often with the victims at the centre of them forgotten while the focus and the name recognition stayed on the man who committed the crimes. We all know Harvey Weinstein, but I think most people would be hard-pressed to name three of his victims. Same with the Golden State Killer and Samuel Little. I wanted to write a book where the women and their stories were at the centre, but I also wanted to be honest about how hard it is to make a popular piece of media that isn’t exploitative. Elle struggles with that throughout the book, despite her best intentions, and I think that reflected my own struggle as an author. Patriarchy and perpetrator-focused crime narratives are so ingrained in us that it can be hard to break free.

What novels inspired you in the writing of Girl, 11?

It’s not a novel, but I’ll Be Gone in the Dark is one of the biggest inspirations for my book. It’s the memoir by Michelle McNamara, one of the most accomplished amateur investigators of the past decade who made a name for herself obsessively hunting the Golden State Killer – first through her popular crime blog, and later as a journalist and feature writer before her sudden death in 2016. Michelle didn’t just write beautifully and intelligently about the cost and impact of crime on local communities. She also worked side-by-side with detectives and criminologists investigating the Golden State Killer. She was one of the biggest inspirations for Elle: an everyday woman who finds a case that she just can’t let go.

Girl, 11 by Amy Suiter Clarke is out now. This Q&A is part of the Pushkin Vertigo Spotlight Week, where we are focusing in on six of our outstanding crime writers – find out more about it here. 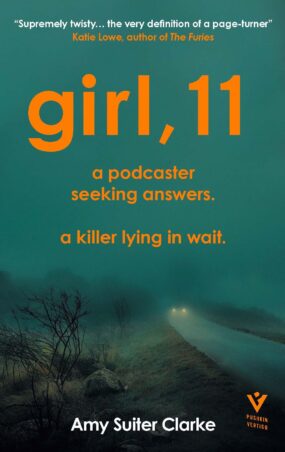