Pushkin Vertigo Spotlight: Pretty as a Picture by Elizabeth Little

Pretty as a Picture is the story of Marissa, a shy but successful film editor, who takes a prestigious job on a closed island film set. Soon, things turn murderous, and Marissa finds herself playing detective in the editing room. We sat down with author Elizabeth Little to talk about her wonderfully imaginative murder mystery…

Tell us about your character Marissa and how you came to write her:

Marissa is kind, quirky, and accomplished; she is also introverted, insecure, and – yes, she knows – just a wee bit stubborn. And, believe it or not, she was also incredibly scary to write. The heroine of my previous novel was a tough act to follow: Jane had such a strong, distinctive voice, and I knew it would be a challenge to create a character who was just as memorable, but completely different. I wasn’t sure I’d be able to pull it off.

Maybe that’s why I decided to put so much of myself into Marissa: I figured I’d be more likely to succeed if I wrote what I knew.

But as usual, the joke was on me: in writing Marissa, I learned more about myself than I’d ever expected to. At least it was cheaper than therapy, I guess.

What were your inspirations for Pretty as a Picture?

My first novel could be traced back to a real lightning-strike ‘what if’ moment, but with Pretty as a Picture the story came to me in a more leisurely fashion: from the start, I knew the book would take place on a film set. I knew that a past, real-life murder would be involved. And I knew that I was going to make fun of directors – because my husband used to be one, and gentle teasing is my love language.

But it unfurled quite slowly from there, to be honest – plot, of course, is rooted in character, and I didn’t fully understand my own protagonist. So I had to take the time to know her before I could figure out where she wanted me to go.

If you were to pick one character from literature to be friends with, who would it be?

If I’m being honest, I don’t want to be friends with any of them – either they would disappoint me or I them, and then there’s a perfectly good book ruined for ever. But of course I would like to believe that Dorothy L Sayers’ Harriet Vane and I would get along brilliantly.

Pretty as a Picture is a fascinating insight into the film industry – have you ever worked in film?

I haven’t worked in film directly, but when I met my husband, he was still working in feature films, and since we moved to Los Angeles ten years ago I’ve had the (occasionally dubious) pleasure of meeting people who work across all areas of film/TV. Which is to say that I’m definitely a Hollywood outsider, but I’m reasonably well positioned to collect data – a little bit like a wildlife photographer, except instead of pictures I collect hideous anecdotes.

So the details in Pretty as a Picture are based in part on my own reading and research—and in part on me poking my head out of my office and shouting questions at my husband such as, ‘HONEY, WHAT’S THE WORST THING YOU’VE EVER EATEN AT CRAFT SERVICES???’

What is next for you?

First up is The Dusk, a graphic novel I’ve co-written with fellow crime writer Alex Segura and artist David Hahn – it is going to be published by Ominous Press, and the first issues should probably be out late this year.

I’m also working on a new novel I’m hugely excited about –the first in a speculative P.I. series. I’m eagerly anticipating my child being back in school full time so I can actually, you know, write it.

Pretty as a Picture by Elizabeth Little is out now. This Q&A is part of the Pushkin Vertigo Spotlight Week, where we are focusing in on six of our outstanding crime writers – find out more about it here. 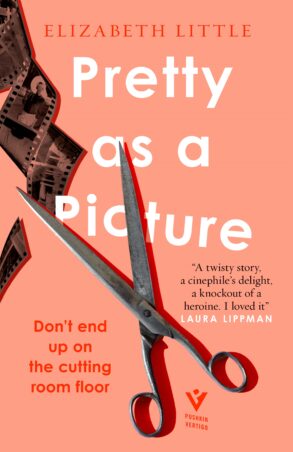