The Adventures of Isabel is an eye-wateringly funny comic mystery by Candas Jane Dorsey, where a queer amateur detective and her cat take on the crimes that the feds don’t seem to care about. As part of the Vertigo Spotlight Week, we asked her about her new book, and why you should pick it up!

If you could give the book to anyone, who would that be, and why?

I would give the book to my tenth grade English teacher, who by actually seeing me may have given me the courage to be a writer in the first place.

I would give the book to every activist I’ve ever worked with, because sometimes you gotta laugh, right?

I would give the book to my first social work mentors from the mid-1970s when we all worked with teenaged girls as brave and hopeful as the ones in the book.

Finally, I’d give the book to my best friend Betty, who loved mysteries and would be tickled I wrote one!

You don’t name your protagonist in The Adventures of Isabel, why is this? Can you share with us a bit more about the decision-making process behind creating your character?

Don’t tell anyone, but my characters are created by typing, not thinking. That is, I don’t plan or decide; rather, I sit down to type. This was especially true with this book, where I was trying something new: writing a book in order from start to finish without doubling back.

I started typing, and the voice of— came flowing from my fingertips through the keyboard, hitting both the page and my ear at the same time. I listened to her. She never spoke her own name. I mean, we hardly ever do, do we, unless we are on the phone or dealing with administrivia somewhere? That reminded me of the nameless detectives of yore, and of noir, and I decided to keep her nameless. Her city’s nameless too, and I deliberately leave out certain descriptions of people so that the reader can cast the movie in their own mind.

The comic mystery landscape has been pretty dominated by straight male authors. Can you tell us more about why traditional ways of approaching crime writing needs to change?

I make fun of a lot of tropes and stereotypes in this book. My protagonist is aware of the vagaries of not only the world she walks in, but also the genre in which she tells her story. I read those male authors but I don’t often find them funny – I feel that some of their humour is really just condescension in disguise.

Samuel Delany, in an essay published in the 1970s that’s no less true now, argued that the novel by its nature is sexist. I’ve been both discovering that he is right and trying to refute him in my own work ever since I read his essay. Traditional crime writing disproportionately casts women as victims, which has something to say about how we see women in this culture. I was a bit horrified that I did the same, but I soon realised I was trying to reclaim her story as a heroic one. The girl who dies is solving the mystery before the book even begins.

What drove you to writing detective fiction after writing sci-fi?

I am as little interested in genre distinctions as I am in gender distinctions. I write what I write, and publishers label its genre! No doubt I am drawn to speculative fiction and mystery in part because a lot of both were read in my childhood home and I’ve read a lot of both ever since.  And both are the dominant media genres these days. Also, John Gardner referred to fantasy and mystery as ‘moral fictions’, fictions which work out the problems of Good versus Evil, or, as Eleanor Arnason so brilliantly reframed it, Quality versus Shoddiness. I am interested in the problem of Good and Evil.

Where does the wider social edge informing your work come from?

Lots of places. Really, one just has to pay attention and one realises how much there is to do. When I was 20, I got my first serious job in a treatment centre for teenaged girls. The people and events I met and experienced there shaped my entire life of activism and filled me with a motivating anger that never seems to give out, but is a very good fuel source for getting books written. In Canada, we are in the midst of a Truth and Reconciliation process with Indigenous First Nations, Metis (Michif) and Inuit people to uncover, undo and/or apologise for the wrongs of colonialism, particularly the residential schools into which Indigenous children were forced. My work at the treatment centre was often with survivors of a systemic child welfare ‘raid’ that was called the ‘Sixties Scoop’, and was for all intents and purposes the successor to residential schools. Continuing to find out that most of the settler history I learned was distortion or downright lying has been both strenuous and improving.

Also, I live in the inner city, in the east downtown (why is the east side of a city so often the place where marginalised people are stigmatised?) of Edmonton, Alberta, Canada (originally called Amiskwaciwâskahikan, now on Treaty 6 Territory). So I’ve seen a lot of racism, poverty, and inequality in policing.

Finally, as a queer person myself, I’m motivated by the inequalities facing queer people. I have to add that I am, and have been, privileged in many ways, and I try to use that privilege to advocate for those who can’t, after listening to what they want. One of my privileges is the ability to write books.

The Adventures of Isabel by Candas Jane Dorsey will be released on 5th August. This Q&A is part of the Pushkin Vertigo Spotlight Week, where we are focusing in on six of our outstanding crime writers – find out more about it here. 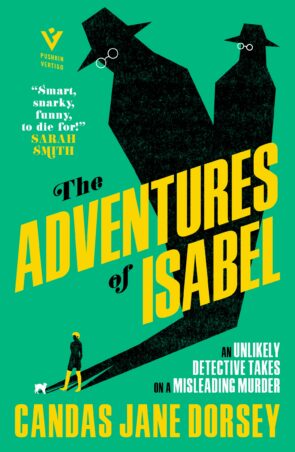 The Adventures of Isabel