Pushkin Vertigo Spotlight: The Others by Sarah Blau

Sarah Blau is the author of the chilling and darkly comic thriller, The Others. As part of our Pushkin Vertigo Spotlight Week, we sat down with Sarah and asked her a few questions about her inspirations, hurdles and current reading list. So, without further ado…

Tell us about the inspiration behind The Others:

When I turned forty and was still unmarried and childless, I began to feel as though the world was closing in on me. Everyone around me kept saying that time was running out, that soon enough I wouldn’t be able to give birth at all, and ‘what was I waiting for’. Then I decided to stop beating around the bush and respond by writing this book.

I wanted to show that there is more than one way to live, that we as individuals should choose how we want to live our lives (or, at least, how we think we want to live).

I wanted to write a book that was both entertaining and murderous, that deals with the concept of voluntary childlessness in some way, particularly surrounding the notion of free will.

It was important for me to include stories biblical women who didn’t want to have children, to demonstrate how every modern dilemma is deeply rooted in the past, that we have never truly reinvented the wheel.

Sheila is a brilliantly witty character, how did you come to develop her distinct personality?

In all honesty, Sheila is me. With all of my flaws, my doubts,fears, jealousy, growing pains, heartbreaks, my adoration of the Bible and even my hair loss. There’s a wide gap between what Sheila thinks and what she voices, but as the plot moves forward, she lets go of her inhibitions and dares to tell people what she truly thinks about them.

In a scene at the end of the book, Sheila has a breakthrough and realizes she doesn’t care anymore what others think. I had such a liberating experience writing that portion that I vowed to reach the day when I would feel just like the character I created; when I would be able to tell those surrounding me what I truly think of them.

In the meantime, I hope my written word will accomplish something similar.

What novels are you currently reading?

I am obsessed with Agatha Christie’s thrillers. I read them over and over again,

now as much as ever. I discover something new each time. She is undoubtedly the master of thrillers, and we are merely her disciples. She doesn’t have a single literary trick under her belt; each novel develops an original mystery in a unique way.

When I matured as a reader, I noticed an interesting fact: her two enduring detectives, Hercule Poirot and Miss Marple, didn’t have children.

Maybe that’s also what allowed them to become such good detectives, they left no traces. Instead, they followed the traces of others.

You cover a lot of big topics and package it into a compelling thriller – was it important to stick to genre when writing this?

Since the book grapples with so many significant themes, I felt that it was important for the text itself to not be as heavy-handed.

I began to write The Others as a realist novel, but the genre seemed to extinguish the power from my pen, as though I was exposing myself too much while making the most important topics appear didactic. So I decided to switch gears—to a new genre! A thriller! A serial killer! Dark humour! Baby dolls plastered on to hands! Through that genre, I felt much more exposed in a real way; I had gained the ability to say all I wanted without being patronizing.

Besides, I wanted the book to be commercially popular in order to convey my message to as many people as possible. I’d say that’s a legitimate reason for making it a thriller.

What has been your favourite response to this novel?

My favourite reaction was: ‘I’m going to send this book to my parents so that

they stop asking me when I’m going to have children.’

The Others by Sarah Blau (tr. Daniella Zamir) is out now. This Q&A is part of the Pushkin Vertigo Spotlight Week, where we are focusing in on six of our outstanding crime writers – find out more about it here. 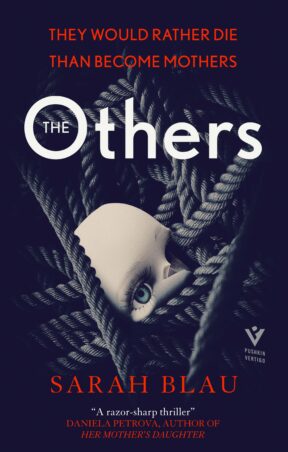