In the Harith Athreya mystery series, RV Raman takes readers to remote and scenic places in the vast Indian countryside that visitors don’t always go to. The first book (A Will to Kill, published on our Pushkin Vertigo crime list) is set in the misty Nilgiri Hills of South India, and the second (Dire Isle, which will be published in 2022) in Bundelkhand, a stone’s throw from the erstwhile Orchha Kingdom. Here, he describes five of his favourite mysteries, novels whose power comes from their unusual, incredible settings.

After reading mysteries for 50 years, only a few have made an impression deep enough for them to linger in my mind for decades. These novels might have become lodged there for many reasons, but often, it is due to the setting. Of course, the other aspects – the sleuth, the modus operandi, the motive, etc. – are memorable too. But sometimes, it is the setting that defines a book.

The setting is not limited to the physical locale alone or the period in which the story is set. They are, of course, essential parts, but the setting also includes other elements that go into creating the atmosphere and the mood of the story.

Here are five cosy mysteries with exceptional settings. I have listed them in the order of the year they were published.

1. The Hound of the Baskervilles by Arthur Conan Doyle (1902)

An English moor and a country mansion combine brilliantly to supply the physical setting in this classic. The real kicker, however, comes from the curse that hangs over the Baskerville family; a legend of a monstrous hound that has plagued the family for generations. It is introduced as “a foul thing, a great, black beast, shaped like a hound, yet larger than any hound that ever mortal eye has rested upon”. As a myth that is hundreds of years old, it forms the backdrop for the story.

I was thirteen when I read this novella, which begins quite innocuously. Sir Charles Baskerville has just died from a weak heart, and his death seems to have little to do with the curse. There are some footprints near where his body was found.

“A man’s or a woman’s?” asks Holmes at the end of the second chapter. I was utterly unprepared for the answer he receives: “Mr. Holmes, they were the footprints of a gigantic hound!”

The jolt I received as a schoolboy was massive! It was, quite literally, a hair-raising experience, as the hair on my arms actually stood on end. To me, this is a masterpiece – not just in plotting but also in narration. The Sherlock Holmes stories are known for their brevity, and the masterly way in which Sir Arthur takes the reader to such an explosive moment so early in the story is indeed admirable.

The legend coming alive set the mood for the story and thickened the atmosphere. Billed early as “such a hound of hell as God forbid should ever be at my heels”, it lives up to its reputation in a dramatic narrative involving the moonlit moor, fog-wreaths and an escaped convict. When we finally meet it, the hound’s muzzle, hackles and dewlap are “outlined in flickering flame”. No wonder it made such an impression on me.

The centrepiece of this story is the infamous Chatterham Prison, now abandoned and in ruins. The Starberth family, who have been the governors of the prison for generations, have a curious history: they die of broken necks. The Starberths also have a bizarre ritual that is mandated by an ancestral will. To inherit the family wealth, the eldest son, the heir, must spend the night of his twenty-fifth birthday in the Governor’s room in the prison. At an appointed hour, he must open a safe and see what’s inside. But soon after the newest heir complies with the ritual, he is found dead, with his neck broken.

Right from the beginning, well before the death takes place, Carr expertly builds the suspense. Soon follows terror. Heaps of it. Dr Gideon Fell, the investigator who makes his debut in this book, is watching from his house as the new heir obeys the mandate (his house is close to the prison ruins). He can see a light in the Governor’s room. When the light goes out far too soon, the terror peaks.

Carr is known for macabre tales, but this one really sent a chill down my spine. The development of the atmosphere is brilliant. To me, this was the most gripping of Carr’s creations. And among Carr’s sleuth’s, Dr Fell is a favourite – he is both cryptic and idiosyncratic.

Egypt and the Nile have always fascinated me. I had read about them in school and had heard many tales originating from this country. Egypt and India, two old civilizations, also have much in common: both have a pantheon of gods, rivers are the backbone for livelihoods and prosperity in both cases, and the social segregations are similar. Egypt was both exotic and familiar to me. As a teenager, I would have loved to have taken a cruise down the Nile, stopping at the fascinating places en route.

So, as a schoolboy, when I came across a murder mystery set on a Nile steamer and written by Agatha Christie, it was an immediate draw for me.

The first part of the book doesn’t take us to Egypt. Instead, it focuses on setting up the human aspects of the mystery. Misdirection starts early. Once the characters board the steamer, it becomes delightfully immersive. However, Egypt was not the only reason why the book made a lasting impression on me. There was another aspect too.

I had read a few of Christie’s mysteries by then, and was getting familiar with her style, the way she drops red herrings and her consummate misdirection. I had told myself that I would be clinical this time and strip away diversions and smoke screens. I would go only by facts, and I would suspect everyone. To my unending, juvenile delight, I cracked the mystery a few pages before the big reveal – the first ever time I had done that in a Christie novel! That satisfaction made it one of my most memorable reading experiences.

I was not aware of Ellis Peters during my younger days, and only discovered her when I bought my first Kindle. The Kindle opened up my world such that I was no longer dependant on local bookstores and libraries for reading material. Within the first year, I discovered more than a dozen Golden Age authors whom I had never read. The Cadfael series was a gem among them. The moment in time is integral to a book’s setting. The three books listed above take us back to the early twentieth century, but they are not historical novels. However, the Cadfael series by Ellis Peters is a historical series to which I regularly return.

Set in a twelfth century Benedictine monastery in Shrewsbury, England, it is a string of quaint and gentle murder mysteries which take place during ‘The Anarchy Years’ of the English Civil War. The kindly monks are dedicated to God’s service, but all around them is bloody cruelty unleashed by the civil war. Brother Cadfael, the detective in this series, was once a Crusader. He understands both worlds and tries to reconcile them. The juxtaposition of two contrasting aspects of human nature is fascinating, especially when set in a rural environment.

Cadfael is a delightful character who is calm and astute. Watching the TV series as I read the books more than doubled the pleasure. The plots here are not as deep and complex as in a Christie or a Carr novel, but the author’s narrative style and the minutely drawn medieval setting more than make up for it. Her writing is elegant, and she takes the time to develop a story. For me, Brother Cadfael is right up there with some of the best sleuths in the Golden Age mysteries. The Devil’s Novice is the book I enjoyed the most in the series.

While listing books with memorable settings, I would like to include one from India, where I reside. Admittedly, the field to choose from is not vast. However, there have been some enjoyable historical mysteries that are set in the Mughal or British times.

The one that stands out for me is the Muzaffar Jang series. It consists of four historical mysteries set in seventeenth century Mughal “Dilli” (Delhi), featuring a sleuth called Muzaffar Jang. What I liked best about these books is the way Mughal Delhi is described. I am not qualified to comment on historical accuracy, but the author’s descriptions of the city, its people, their clothes felt so authentic to me. In one book, she describes the Badshah’s court, confidently detailing the red-lacquered railings and the white marble throne. In another, she vividly paints a picture of the inside of a courtesan’s house, down to its furniture and curtains. The attention to detail is noteworthy.

As with the Cadfael series above, these mysteries themselves are not complex. But I did feel a sense of satisfaction after reading each book.

A Will to Kill by RV Raman is out now with Pushkin Vertigo. 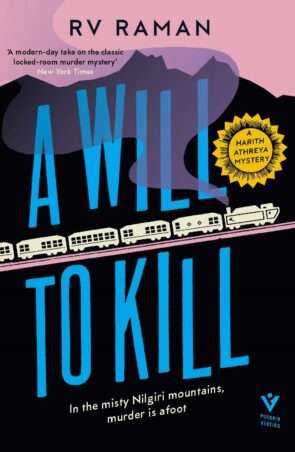