When Sheila’s old classmates start to be murdered, an old pact simmers to the surface: one in which they swore to never have children. Now, each victim is found tied to a chair with a baby doll glued to their hands, the word ‘mother’ carved into their forehead like a mark of Cain – and Sheila must be next.

As a huge fan of the genre herself, we asked Sarah to recommend her Top 5 Thrillers of all time. Here’s what she had to say:

Agatha Christie, the queen of thrillers, has a lot of great books, but I especially love this one.

So, who really murdered Roger Ackroyd? I don’t want to give any spoilers here, but I can say that Christie uses a sophisticated literary trick that many writers will go on to imitate.

The mystery is solved by the mythological detective Hercule Poirot, who understands human psychology more than any other detective. As he always says: “I only use the little gray cells”, but what makes Christie’s writing so special is that it makes the reader activates their own gray cells, too. The solution is in front of your eyes, you just have to read carefully and that’s it! There it is.

I must say that in this book, I did not guess who the murderer was. I was not even close.

A powerful and incisive psychological thriller that goes deep into the soul. I could not get it out of my mind for a long time.

The story is about mothers and daughters, about girls and women, and what happens when young girls approach sharp objects – what do they hurt? The body or the soul? And which option is better?

After many years, Camille Preaker returns to her hometown. But it turns out you can never really come back home, especially not with a cold and deceptive mother, like her mother Adora.

As I read the book, I went back to my youth, remembering what had hurt me so much there. This book will hurt you too, and then heal you.

Into the Woods / Tana French

This wonderful thriller is about memory, and how certain memories can disappear and we will never be able to recreate them, even though we will feel their impact for the rest of our lives.

Rob Ryan is a fascinating character. From the outside, he functions as usual, but inside he has a black hole that cannot be filled.

The plot deals with the murder of a little girl, but it corresponds with a past plot about the disappearance of three little children, one of whom was Rob Ryan himself. He returned from the wood, but his two friends disappeared forever. Despite all his efforts, he can’t remember what happened there, deep in the wood.

While reading the novel, I was flooded with flashbacks from different periods of my life – there was something in the reading that woke them up.

It was an intense reading experience of a spectacular thriller.

I swallowed this book in a few hours, I could not stop reading it.

Korede, the protagonist of the book, discovers that her beautiful little sister is a serial killer, who kills the men that disappoint her. Her sister turns to Korede for help – does she have any choice but to give assistance?

In its amusing way, this thriller deals with very heavy issues: jealousy between sisters, parents preferring one of the children, and deep questions about beauty.

This book does not hide behind masks and is not politically correct. It clearly says the following: Your sister can be your worst enemy. And when you think about it, that’s very natural.

This book has the best thrillers: a father who almost slaughters his own son, a sister who steals her sister’s husband, a brother who murders his own brother, and some brothers who sell their brother to be a slave.

And from above, the great mighty writer, who wrote all these plots, God himself, looks at us and says: You will never be able to guess the ending!

The Others by Sarah Blau (tr. Daniella Zamir) is out with Pushkin Vertigo on the 27th April. Get your copy now. 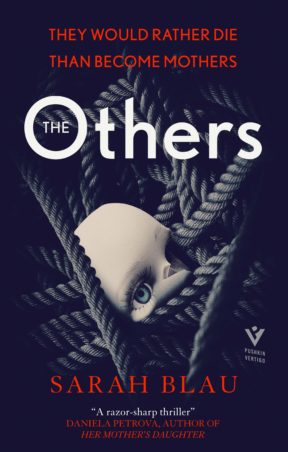