Sarah Gilmartin is the author of Pushkin’s lead debut of the autumn, DINNER PARTY: A TRAGEDY. Set between the 1990s and the present day, from a farmhouse in Carlow to Trinity College, Dublin, Dinner Party is a dark, sharply observed debut that follows Kate Gleeson, a woman spiralling in her early 30s, and her family as they navigate the trauma of the past as it ripples in the present.

Dinner Party has recently been on the reading lists of Meg Mason, Anne Enright and John Boyne, but we wanted to know what books Sarah has on her bedside table waiting to be devoured. Here are her to-be-read titles, and what it was that drew her to them.

The Coward by Jarred McGinnis

I recently saw Jarred McGinnis speak about his debut novel The Coward at the Booksellers Association Conference and was so impressed by his story and the depth of feeling he managed to get into a relatively short reading.

The Vanishing Half by Brit Bennett

Brit Bennett’s The Vanishing Half has already garnered a number of accolades, not least a shortlisting in this year’s Women’s Prize for Fiction. I was first drawn to it because it features twins, like my own novel, but also because I loved Bennett’s debut The Mothers, a deft story about unwanted pregnancy, mental illness and racial injustice in modern America.

Mrs Bridge, first published in 1959, featured in a Sunday Times article about overlooked modern classics. Written by the American author Evan S Connell, its humorous take on an upper-middle class housewife and household appealed to me. I love renewed interest in underrepresented writers from the past. Penelope Mortimer, John Williams and Elizabeth Taylor all come to mind.

Intimacies is the second short story collection from the acclaimed Belfast author Lucy Caldwell. She writes brilliantly on the domestic world, shedding new light on the issues and intricacies of marriage, motherhood and what it means (and takes) to be a woman in contemporary society.

Auguries of a Minor God by Nidhi Zak/Aria Eipe

I like to have a poetry collection on the beside locker for restless nights. Nidhi Zak/Aria Eipe’s debut Auguries of a Minor God (Faber, July 2021) is everything you could ask for – rich, diverse, thoughtful poems about matters both personal and political.

Years (decades) late to the party, I’ve discovered the novels of Gwendoline Riley. Over the summer I’ve read My Phantoms, First Love and her debut Cold Water. Next up is Opposed Positions, whose first person narrative about a writer and drifter seems in a similar vein, which is to say, writing that is intelligent, perceptive and forensic.

DINNER PARTY: A TRAGEDY by Sarah Gilmartin is out today! 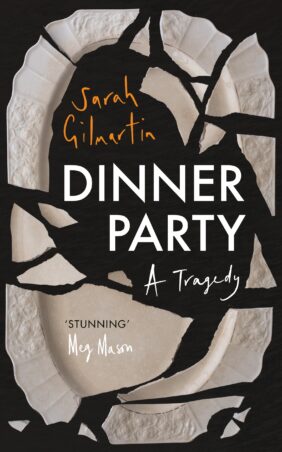