As jagged as it is beautiful, as poetic as it is furious, Machine by Susan Steinberg is a propulsive story of communal guilt in the wake of a young girl’s drowning. Out now in paperback, we asked author Susan Steinberg to tell us a little about her process of writing this uniquely experimental novel.

I started writing Machine as a series of interconnected short stories, all of which revolved around a group of kids living in a beach town over several summers. I don’t generally start a project knowing what’s going to happen—narratively, structurally, or formally—until I’m years into the process. I didn’t go into this book, for instance, knowing that a character would drown, though it became an integral part of the story, nor did I know that it was going to be a novel until it was nearly complete. It was some time, in fact, before I remembered I’d written something related many years before, a novel, my first, that I’d attempted then abandoned when it had become unwieldy. I worked on that project for years before giving up on it and starting a new one, my story collection Spectacle, and when I found I was working with similar content in Machine, I returned to the old document and discovered I’d written scenes that now belonged in the new book.

In a sense, I unintentionally had spent years creating an archive for a future project, and I realize now that this is part of my process. I often try to write things before I’m emotionally or intellectually ready, so I have to put them aside until I can engage with the material. It must sound like I waste a lot of time, though I don’t see it that way. One’s process is one’s process, and there’s not much I can do about mine. The few times I tried to write according to someone else’s plan, I failed. Or, more precisely, I was overwhelmed by the project. I’ve since learned to embrace my way of writing that allows for whatever surprises come up, which is, to me, the fun of it. A lot of writers love that initial burst of writing something new, but I prefer the revision process, which is more like working on a puzzle, as one slowly becomes more conscious of all of the parts.

Once I decided Machine was a novel, I had to condense years, characters, and narrative threads; I had to reorder the sections and reconsider the transitions between them; and I had to let go of thinking of each part as its own stand-alone story. In a way, this rigorous part of the revision taught me how to write a novel in the way that I would need to write one; it helped me to find an approach that was less about an adherence to narrative and more about the discovery of it. I once thought that writing a novel meant simply pushing forward narratively, that, in a way, a novel was just a long story that eventually one had to hold, in its entirety, in one’s mind. This would explain why I abandoned the first novel I tried to write. It was an impossible task for me, as I see story as a constantly changing thing, something that can’t be held on to.

Machine by Susan Steinberg is out now. 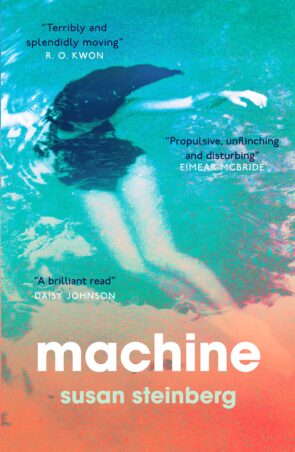